So June was the month of transformations for Prince! After receiving much ridicule over his 70’s style feathers, Prince was impeccably behaved whilst having a full clip and they are now gone. He looks very smart with his new streamlined look, and even Mandy (his Mum) is now converted to being feather free after her initial horror, what do you think?? 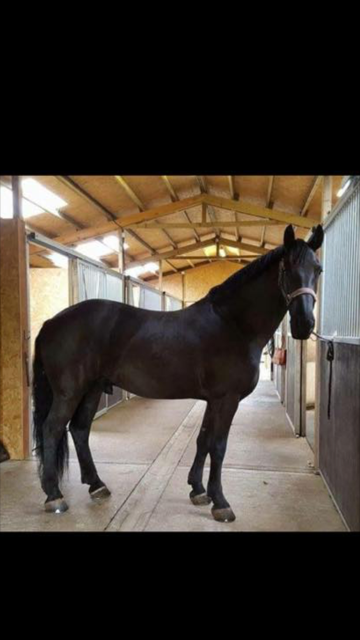 Next was his teeth, the vet at squad training had said his teeth were sharp and he certainly wasn’t kidding. Sam Oakes, our equine dental technician came out to rasp his teeth for him but unfortunately he wasn’t able to finish the job as Prince wasn’t as keen about standing still for this job, so we had to abort and take him on a trip to Three Counties Equine hospital to be sedated and have the job finished off, plus he had his vaccinations at the same time, hopefully this will stop him from spitting his food everywhere whilst eating. However the sedation meant that we had to withdraw from the competitions we had planned at the end of June, because it is on the list of prohibited substances and could have been detected if he were to be blood tested. Its a three year ban from the sport if you are caught competing whilst a banned substance is present, so definitely not worth the risk.

So what is usually a hectic time of year for us with the main competitions of the year is very sedate at the moment as Prince and I continue to forge our new relationship, he is going from strength to strength though and I think that the BettaLife Pharmaquin supplement is definitely working, as his trot seems to be getting  very springy  . Its very strange as Bongo and I had qualified to go to the KBIS semi finals at wellington in June, plus it would have been our debut competing 3* at the forth coming international competitions in July at Hartpury and Bishop Burton. All of our Para pals are out and about, some of whom are actually in the final stages of selections for this years Paralympic games so we should have been in the middle of all the action, but with Prince being a new horse, we are unable to compete as it is the horse and rider combination that qualify, and obviously Prince hasn’t competed as yet.

I have spent my time well though, as on the 13th June I  visited Lyndon Green Primary school, to give a talk to year 5 and tell them all about my journey so far. It was inclusion week for the school, so fitted in well with me telling them all about my own school life with a disability ( not all of it positive), but was able to relay the message that anything is possible if you work hard enough and believe. as part of our funding conditions we are required to make several athlete appearances over the year to inspire the next generation, which isn’t a chore at all for me as I love doing this sort of thing.

The children were really well behaved, and I think I managed to keep their attention, plus they seemed genuinely interested, I did take some little prizes which were given out to those who answered questions about my talk correctly at the end, so that might have helped. I also took things like my rosettes, some horse shoes and bits etc for them to look at and feel too.